Update from 2018: I don’t think my younger self got this right, I wouldn’t mind writing a following on piece at some point. Please take this post with a grain of salt (or two). 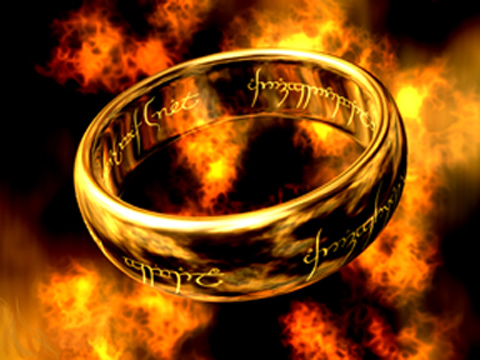 Build tools should use a build cache, emphasis on the cache, for propagating results from one component to another. A cache is an abstraction that allows computing a function more quickly based on partial results computed in the past. The function, in this case, is for turning source code into a binary. A cache does nothing except speed things up. You could remove a cache entirely and the surrounding system would work the same, just more slowly. A cache has no side effects, either. No matter what you’ve done with a cache in the past, a given query to the cache will give back the same value to the same query in the future.

The above quote was taken from Lex Spoon’s amazing Recursive Maven Considered Harmful. I stumbled across Lex’s post in the equally good In Quest of the Ultimate Build Tool.

Over the past couple of months I’ve begun my own quest, to seek out new build tools and to boldly shave a yak no developer has shaved before.

Beware: This series doesn’t contain any answers. I wish it did.

In a past life I had the misfortune to be stuck working with Clearcase. I hated it so much that I even wrote my own bridge to Git.

Despite it’s many flaws it also has some interesting features that we currently lack in this new Git world.

A large part of Clearcase is the concept of “dynamic views”, where a custom filesystem is used to provide a “view” of the entire code base, but files are only downloaded on demand.

This can be combined with Clearmake, which caches binary artifacts derived from input source files, which can be winked in” to another view with those identical inputs.

This actually sounds a lot like Google’s file system

Two of the most interesting build systems that are emerging at the moment are Buck and Pants, both based on Google’s Blaze.

However, I would argue that both have a fundamental flaw that I suspect will make them impossible for handling modules at different versions. And that is that they assume everything is kept in a single folder structure. A temporary work around would be to use Git Submodules. But consider Buck build target’s, which are always absolute. What happens if you have:

At least at the moment //lib/foo will mean something different depending on where Buck decides is the “root”.

Buck and Pants are just not designed for building sub-components of a system. How would you extract a submodule with it’s own release cycle (eg. open sourcing a library)? The answer, I suspect, is you have to step outside the warm comfort of your specialised build tool.

Facebook recently announced how they were using Mercurial to scale their codebase.

Some of the advantages of this approach.

Not surprisingly I agree with the critics of this approach that they should be looking to modularise rather than lump everything together.

As we’ve seen companies like Facebook and Google can solve their build problems by “cheating”. And by cheating I mean they are making a reasonable optimization based on reducing variables, such as restricting everything to a single codebase. To be clear I’m not criticising this approach, but I don’t believe that is reusable/useful in the general case, which is all I really care about.

To take an example of why this wouldn’t work, let me talk about Atlassian. We have a number of different products such as JIRA, Confluence and Stash. Obviously we want to share common libraries, but each product has a different release cycle. In a single codebase both would have to always build against the latest version of libraries (which isn’t necessarily a bad thing, but that’s a topic for another day). Introducing a new feature in the library for one product may break another accidentally. As hinted above I believe this is the same problem faced at Google/Facebook if they decide to exact a library for open sourcing.

To help expand on what I’m envisaging, let’s step through through a typical day of the life of a developer using UBT.

08:30 - Bob starts work by pulling from Project A to get the latest. He runs a build, which doesn’t take very long because the build machine ran last night and he downloads only new artifacts. That’s probably a good thing because his team is using Scala and it’s slow at compiling.

09:00 - As Bob works on a new feature he decides he needs to update a common library that his company have open sourced. He runs ubt checkout libB which clones the source of libB into his project and he adds that to his IDE. Running ubt build does nothing yet because the files in libB haven’t changed yet.

10:00 - Bob has finished work on his feature and adding a new method to libB. He runs ubt checkout -b feature/X, ubt commit -m "Feature X" and ubt push which commits the changes to the two different repositories, pushes the change in project A to the internal Git server, and libB to Github. He then creates a review in both systems.

10:01 - The build server, which is configured for Project A, starts building detects that libB has been updated and clones/builds this module first, and then builds Project A.

11:00 - The changes for Project A are accepted and then merged even though the PR for libA is still open. When the build runs again, nothing needs to happen because the filesystem is identical to the previous build.

12:00 - Bob’s team decides they want to do a release, and click the “release” button in the build server, which does nothing but add a tag to the latest commit in Project A and marks the artifact to keep.

12:05 - Alice has just pulled the latest and run a build, which also does nothing but download the new artifacts for both Project A and libB as they have already been built.

13:00 - The artifact server runs it’s daily GC, cleaning up the artifacts from the previous day, but leaving any artifacts that have been marked as “release” (including all the dependencies).

Please excuse the farcical example, but I hope it illustrates what I think we should be striving for. For developers at Facebook/Google I suspect some of this is largely a reality, but what about the rest of us?

In particular I want to point out a few things that are missing from the previously mentioned build tools.

So when can you start using UBT?

Nix is a “purely functional package manager” that was conceived by Eelco Dolstra way back in 2003. Nix captures every input into a source build, which ensures they can be recreated. In addition it supports downloading build artifacts to be used in place of a source build if (and only if) the inputs are identical.

One of the things that caught my attention was Nix’s companion build server Hydra. It can build a single Nix expression, but recognises the dependencies between builds which re-uses components. Here is an example of a build of common dependency of a project (note the “cached from” link). 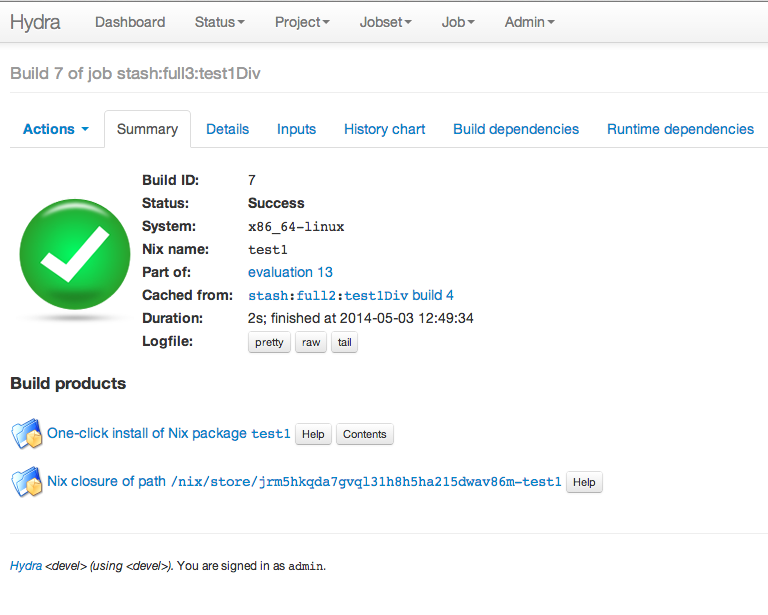 Hydra has the concept of a “release”, which just promotes previous builds.

Finally, Nix has something called a “channel”, which is a list of expressions and their binary output. You can subscribe to a channel, and Nix will automatically download binary artifacts if the local expression matches. Hydra conveniently publishes a channel with the latest artifacts of each project. Unreferenced artifacts can be garbage collected by running nix-store --gc.

This only touches on a few of features of Nix, but these are the ones that align with my “wish list” of UBT features.

An interesting benefit that falls out of Nix is that it understands how to build things. This is not necessary surprising if you think about source builds.

To build with any command in Nix, even simple commands like mv or cp, need to be declared as inputs. As part of the input to your build you must provide the recipe for these, just like any of your other dependencies. When someone builds your script it will first need to resolve those inputs, which may potentially result in a build or download of mv, and so on. The same is true for javac or any other compiler, why given them special treatment?

It’s turtles all the way down.

So what’s the catch?

To use Nix as UBT comes with a few gotchas.

Nix currently doesn’t support recursive builds. It requires that the entire “expression” is on the local filesystem. This would require that every dependency that is built with Nix for a given build would need to cloned, regardless of whether you manage to download a binary artifact. For someone just starting on a new project this could be incredibly cumbersome.

As of only a few months ago Shea Levy has opened a PR that looks to rectify that. I also had an enlightening discussion with Shea on IRC.

This one is a little trickier.

And now it’s corresponding “derivation”. This is what Nix resolves everything to, you can think of it like the “assembly language” recipe of Nix.

Because Nix is tracking every input, you might be able to see that for my build I would first need bash-4.2-p45 and openjdk6-b16. For this binary artifact to be shared (via a channel) to other users, they would also need those exact dependencies. Even the slightest change in Nix environment would result in a cascading build of every library.

At least coming from my cosy Java world this seems excessive. Compiling an artifact with Java 6.x will produce an artifact that is compatible with any subsequent Java version and any OS, give or take methods that have been removed from the core library.

I suspect this is an inevitable trade-off between fully reproducible builds and convenience/speed. Once you start messing with what it means to be a dependency you end up with builds that aren’t always reproducible because you made an assumption that was true at the time, but latest proved to be false.

I was vaguely hoping that my investigations into Nix would have a more immediate and practical outcome. It certainly solves the source build problem in a powerful and elegant way, but perhaps a little too well. Is there a middle ground? Can I have my cake and eat it too?